It's time for another translation, this time it's MK 3. Credit goes to Crash Nicker yet again, thanks! 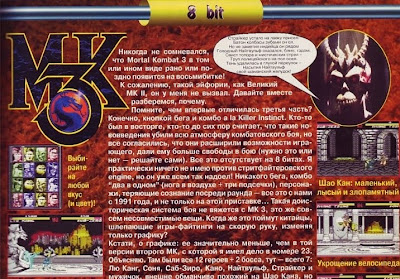 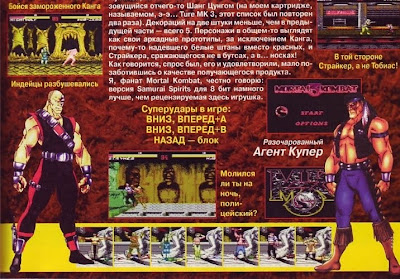 And now, the translation:

Nobody would doubt that Mortal Kombat 3 would appear on the 8 bits in any way! Unfortunately, this game didn't gave me an impression that the Greatest Ever MKII. Let's discuss why.
Do you remember the things that were new for MK3? The RUN button and combos a-la Killer Instinct, of course. Ones were happy, the others supposed that these new features just devastated whole athmosphere of the Kombat fights, but everyone had to agree with the fact that they made the player's possibilities wider and made his freedom of butt-kicking bigger (now you decide whether it's good or not). But that's not present on the 8 bits. I have nothing offensive against that Street Fighter engine, but it became so-o-o-o boring! No running, two-in-one combos (juggle kick + three sweeps), the characters that become dizzy at the middle of the round - we are seenig this since 1991, and not just on this console... That prehistorical battle system doesn't even go close to the MK3, because these are absolutely different things. When those Chinese who keep stamping fighting games with the only graphic part changed are going to understand that?
Talking about the graphics, this part has been drastically shrinked, compared to that version of MKII that I have reviewed already in issue 23. Let me put this in a nutshell. In MKII, you had all 12 heroes + 2 bosses while in here you have 7: Liu Kang, Sonya, Sub-Zero, Kano, Nightwolf, Stryker and a guy that resembles Shao Kahn but has a name of Shang Tsung for unknown reasons (on my cart called... erhm... Ture MK3, the roster has been repeated twice). The number of backgrounds became fewer too - only 5 to play at. The characters, actually, look close to their arcade prototypes, with the exception of Liu Kang who wears white trousers instead of read ones and Stryker who fights not in boots, but... in socks!
While chasing for a new bag full of money, the creators of this game haven't adored so much about its' quality. As a fan of Mortal Kombat, I must say that Samurai Spritis for 8-bit is much, much better that the game that the reviewed game. Seriously.

LINES UNDER THE SCREENSHOTS (in their respective order):
- Choose the colour (and the flavour) you prefer
- Shao Kahn: small, bald and pretty evil
- Bow to the frozen Kang
- Fixing the bicycle [note: meaning Liu Kang's brand kick]
- The native Americans are driving crazy this time
- Stryker is to the right, not Tobias!
- Say your prayers, COP!

And I swear, no posts before the Darkseed post!!! And about MK3... I'd also take MK2 over this one.

Edit:
On the MK3 article, they missed a command: Down, Down, A. This is a different move for each character. Just from the commands, this game seems like it was hacked off of Street Fighter Zero 2 97. Thanks KingPepe for pointing these out!
Update: Rendering part 3 out of 4 of Darkseed's playthrough.
Written by: V Date: 6:09:00 PM