Greetings! Boy, have I got something special for you today. This time I got an article from a Russian magazine named Velikiy Drakon, in English The Great Dragon. This magazine actually had articles about pirated games!

Here's the Mortal Kombat 2 article. Thanks for Crash Nicker for sharing and translating!
Quoting him:

Here are the pictures first. Click on them for full size! 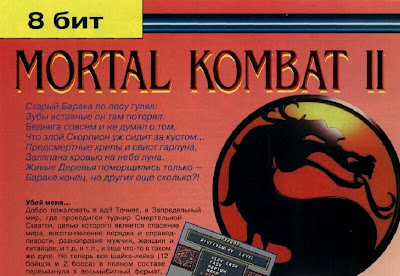 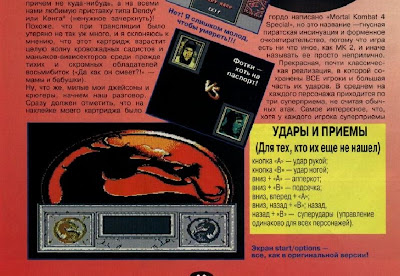 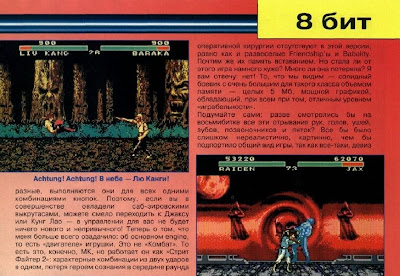 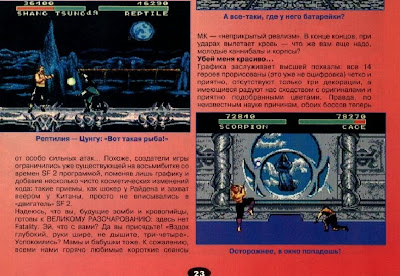 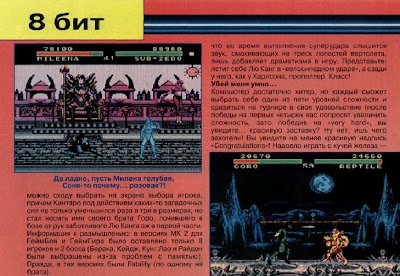 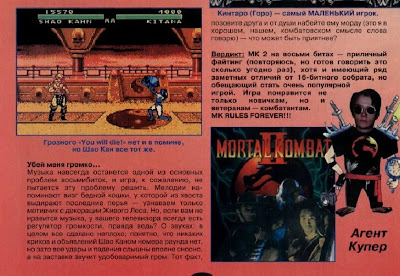 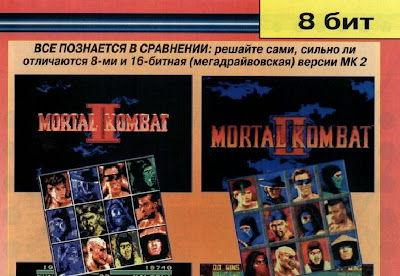 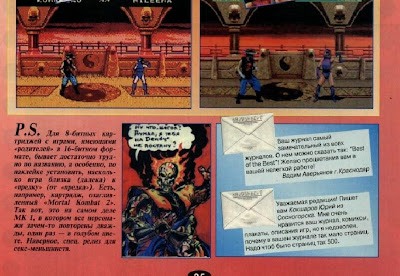 And now, here's the translation.

KILL ME...
Welcome to Hell! I mean, to the Outworld, where the Mortal Kombat tournament is held. The object of the tournament is about saving the world, returning the good old order, balance between males, females, the Chinese and so on, and so on, and something like this. But now, all the Bad Company (12 fighters and 2 bosses) has been thrown onto the 8-bit format. Not anywhere else, but on our favourite console like Dendy (R) or Kenga (R) (underline the one that you prefer)! It seems like there was little losses during the port, so I guess that this cartridge will start a whole wave of bloodlust killers and hacking maniacs among the owners of 8-bit consoles that were quiet and harmless before (Mothers and grandmothers: "How could he say that?!").
Alright, my best beloved Jasons and Kruegers, let's begin our talk. I must mention that the sticker on my cartridge actually said "Mortal Kombat 4 Special" but this title is just a mean pirated joke and senseless PR-ing, because this game is nothing else than MK2, and you can't give it a name other than this. An awesome, certainly classic realization where ALL the characters are kept alright, as well as most of their moves. The average quanitity of the moves for all fighters is three, not counting the regular ones. The most interesting fact is that altrough every fighter has unique moves, they are all performed via the same button combinations. So all in all, if you already studied all Sub-Zero's tricks, you may pick Jax or Liu Kang without a shadow of doubt: you will experience no discomfort while controlling them. Now, about the thing that confused me most of all: about the engine of the game. It's not the Kombat. I mean, it is MK, certainly, but it works more like Street Fighter II: two-hit combos, being dizzy at the middle of the round after a series of strong attacks... Looks like the creators of this game decided to recycle the already existing SF2 code with changing the graphics and adding some cosmetic changes since some moves like Raiden's shocker and Kitana's fan grab won't be able to suit the SF2 engine.
And now I hope that you, my future zombies and vampires, are ready to face the MOST GREATEST DISAPPOINTMENT EVER: no Fatalities. Hey, what's wrong with you? Sit down and calm. Imagine that you're walking in a forest, with birds singing everywhere? Calmed down already? As I see, mothers and grandmothers already did. Alas, but those loved-with-passion operational surgery sessions are not present in this version, as well as Friendships and Babalities. Mournful. But that didn't make the game worse. No! Because everything we see is a really decent action game with a huge capacity of memory - 5 megabytes, and great graphics; in addition, it has a fine "playability" after all.
Think yourselves: would the scenes with ripping the heads, arms, legs and such suit the 8-bit that well? That would look completely non-realistic, imitative, and that would make all the game look worse since MK's motto is "the reality, uncovered". Well, at least you have blood flying out of fighters as they get hit, then what else do you need, my young cannibals and copses?

KILL ME NEAT...
The graphics probably won't be overlooked: all the 14 heroes are drawn (not digitized) that way that they are still recognizable, there are only 3 backgrounds missing, while the rest boasts with their accuracy to the originals and their palette. Of note is, however, that for the reason unknown to the science, both bosses are instantly selectable from the fighter selection screen. Kintaro, with the help of some soft of mystic powers, not only became three times smaller, but also started to call himself his brother's name, Goro (who has been deceased by our adorable Liu Kang in part one). Some additional info: in the MK2 ports for GameBoy and Game Gear, the developers left only 8 players and 2 bosses (Baraka, Cage, Kung Lao and Raiden were thrown away due to memory restrictions). But this version actually had Fatalities (one per hero).

KILL ME LOUD...
The music has always been one of the main 8-bit games' problem and this game, unfortunately, doen't even try to fix the problem. The tunes will remind you a squeak of a cat which has its' last feathers pulled out of the tail - the only recognizeable melody was found on the Living Forest background. But, if you don't like the music, then why don't you turn your TV's volume down? The sounds: overall, it doesn't sound bad; no shouts and Shao Kahn's round number announcements, of course, but all the hits and falls are heard okay, while on the title screen you may hear an astonishing thunder. The fact that while you perform special moves, you hear a sound that resembles a sound of flying helicopter, just adds some more drama into the game. Just imagine Liu Kang flying around performing his "bicycle kick"; and, on his back, he has a propeller, just like Karlsson. Cool!

KILL ME CLEVER...
The AI is very tricky, but everyone could choose one of five available difficulty levels and then enjoy fighting in the tournament. After you win on the first four difficulties, you will be asked to increase it, but when you beat the game on the fifth, you'll see... a nice ending screen? Not that! You will see an even more nice "CONGRATULATIONS" title! If you are bored to play with a bunch of steel, you may invite a friend and kick his ass (of course, in a good, kombatish meaning of this word) - is there anything more addictive than this?

OVERALL: MK2 on the 8-bit consoles is a decent fighting game (I repeat this again, but I'm ready to repeat this yet a lot of times). It has some really spotable differences to its' 16-bit counterpart, but still, it tends to become a really popular game. Not only newbies are gonna like it, but the insane Kombat veterans will enjoy it as well.
MK RULES FOREVER!!!

TITLES BENEATH THE SCREENSHOTS (in their respective order):
"No! I'm too young to die!!!"
"Mugshots. Just like from a passport."
"START and OPTIONS screen - everything's just like in the original game"
"Achtung! Achtung! Liu Kangs are in the sky!"
"Who knows where this guy stores batteries?"
"Reptile to Shang Tsung: 'Today I've caught SUUUUCH a huge fish!'"
"Careful, you'll break the windows!"
"Fine, Mileena's blue, but why Sonya is... PINK?!"
"Kintaro (Goro) - the SMALLEST player ever"
"You won't hear his evil 'You will die', but Shao Kahn is all the same"

MOVELIST
A - punch
B - kick
down + A - uppercut
down + B - sweep
down, forward + A; down, backward + B; backward, backward + B - special moves (the controls are the same for all the characters)

There you go.
What's my opinion? It kinda sounds like they were paid to do a good review on it, but they actually weren't, according to Crash Nicker. Anyways, it is a good idea to include a movelist. Same for every character. It isn't a really bad game, but not the best pirated NES fighter. That's SFIV in my heart. The review is detailed, did include lots of snapshots, although it's kinda risky to make an actual comparison to the original MKII.