Guess who translated it. Of course! It's Crash Nicker, who else? :P
I'm only showing the bottom parts of the page including this article. You remember the Commandos Genesis pirate article? That was on the upper half of the page both times. 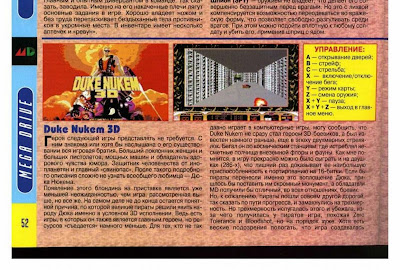 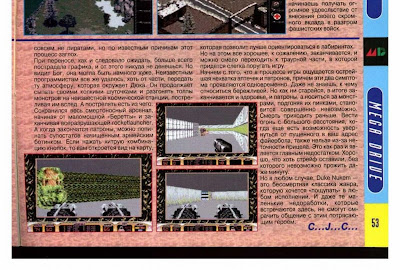 (EDITORIAL) (From our beloved translator... :P)
Men, that review is supposed to be translated long ago. But, as you see, I haven't been making it as long as Duke Nukem Forever (who had to shut itself down eventually) and you got it fresh and cold. Enjoy.
COMMENT ON THE GAME: Whoo, PC games keep storming SEGA MegaDrive! Yeah, TecToy's try to port the infamous 'Come Get Some' shooter was not that brilliant as... no, wait. BLOODSHOT WASN'T BRILLIANT AS WELL! Same for Zero Tolerance. Well, you have a save feature (not passwords!) but you have only 9 levels and singleplayer mode to mess up with. And, just for heck, it consumes 4 megs of RAM (for comparision: Super Street Fighter II used 5, Ultimate MK Trilogy uses 10). At least the monsters are not one-si... No, I don't mean gay monsters, I mean monsters' sprites. And the controls. Only one suggestion: WHY DO I HAVE TO PUSH A, B AND C AT THE SAME TIME TO PAUSE THAT GAME!?!? Perhaps these guys at TecToy are way too lazy to make a 3/6-button joy detector (or, no, ONE guy who made the music and the coding) and decided to put an 'activator' feature in there. Stupid. But, overall, worth tryin' at least once.
COMMENT ON THE ARTICLE: Well, it's okay, but LAWL, the author thought that it was developed by pirates. And LAWL it's not Beretta but rather a Desert-Eagle-looking thing. And LAWL again, a team of programmers. A+B+C, CREDITS, list to the TecToy's part.

The protagonist of our next game is not needed in any kind of introduction. All the gaming people know him or, at least, heard about him. A big lover of women, big guns, stylish cars and a cool comedian. The humanity's savior and leading pigcop-herd. It's nearly impossible to not to recognize that all-known man after such a description - Duke Nukem.
The appearence of this blondie on MD was less unexpected than in case of our previous game, but anyway. It's not actually known why do the great pirates decided to show Duke in his 3D appearence to people since there are a lot of games starring him but consuming much less power. For those who just started playing computer games, I have to admit that Duke didn't become a 3D Action hero from the very beginning as he was popular earlier, in the era of 2D platform games. There, he was running on space stations ripping all the extraterresial flora and fauna on the way. As I remember, the game was playable on the 286 comps, and that's yet another proof of it's ability to be ported to 16-bit consoles. If pirates would rescramble THIS version of Duke, they would deserve, at least, a statue while the happy owners of MD would get a really splendid action game.
But, alas, pirates decided to go the other way around, like, on the progress side, and went 3D. The 3D, however, got scared and fled, so as the result we have a game resembling Zero Tolerance and Bloodshot but much worse than they both are. Of course, there were supposes that the game wasn't created by pirates either but, by known reasons, the supposes didn't go through well.
During the porting, as everyone could expect, graphics were downgraded. But it seems like it could be much worse. The team of unknown programmers did, even if partly, moved that athmosphere that Duke is surronded with. He keeps trashing his neaty jokes and running with countless bunches of monsters on an unknown space station, shooting them at the same time. Talking about shooting, there's a lot of weaponry to choose from. Beginning from a weak Beretta and ending to the alldevastating rocket launcher. When all the ammo is gone, you may kick those alien bastards with a cleany army shoe. When you tap a combination of buttons, you'll be able to see the map which will help you to not get lost in the labyrinths.
Unfortunately, all the good ends here and now we're going to a morbid part where I'm going to shame the game a little bit.
First, when playing it, you feel a catastrophical lack of ammo and medkits, the worst is that both categories of stuff are decreasing at the same time. You don't even know to what to try to keep. But whatever you do, you still run out of both ammo and health. The death comes much earlier now. Even firing at long distances while trying to dodge a fireball launched at you became harder due to the inaccuracy of the crosshair. To mention, that is the main inconvinience. Thank God they've left strafe in, cos' without it, you won't be able to survive even for a minute.
But, in any case, Duke Nukem is an unkillable classic of the genre which you probably might want to try in any of its' instances. And even some cons (that you will meet here) won't spoil that overall Duke feeling whatever they will do.

The Ninja's word: I couldn't even complete the goddamn FIRST level! Seriously, this game is just plain cruel on difficulty. If you seriously want to play Duke, then pop in a PS1 version. OR the PC version if you can find a normal one. The pausing in this game is lol - a+b+c... what the hell? - as well as, well the idea. 3D is not always the best idea even on 16-bit, with of course exceptions like Super Mario RPG on the SNES...
Written by: V Date: 5:42:00 PM