Now that exams are done, I'm into LPs, but sadly, not into pirates yet... but Crash Nicker wrote an article. Here it is:

Another article today. No, not a translation of an article from the Great Dragon. And not even an article about the New Reality. Today, we're going to talk about... let's call it 'neopiracy'. I currently find no point of retelling about new games that are being stamped by the pirated for a billionth time. Well, on THAT topic, I had one game that was not available as a ROM before... it's Lion King 5, sent to CaH4e3 and still undumped, I suppose. Oh well. So you won't see this multicart in my collection I shall list below (yes, I will list my collection right here, right now). 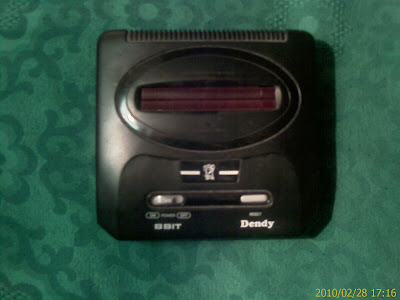 As I recall, on one site this thing was listed as 'Dendy-7' while on the box, it says 'Dendy-2'. Grappled from a local gaming shop just for ~$9. Cheap and semireliable. Also, the gamepads for this piece of plastic ACTUALLY resemble those which were on SEGA Mega Drive II... one thing to notice however: the 'C' button is binded here as 'A+B', while 'Z' is correspondingly 'X+Y' a.k.a. 'Turbo A+Turbo B'. Wait, one more: the 'SELECT' button is still here, as 'MODE' (which occupies the same location as R1/R2 buttons on your regular PS gamepad).

I also saw 'Dendy-3' there which was nothing more than a visual replica to PS. It even costs more: ten dollars. TEN F***ING DOLLARS. The question is: why pay more if it's the same quality? So I bought 'Dendy-2'. Later I equipped myself with two pads from 'Dendy-3', which are just goddamn comfortable to play with... The D-Pad glitches, however: when you try to turn to the left, it goes upper-left instead. 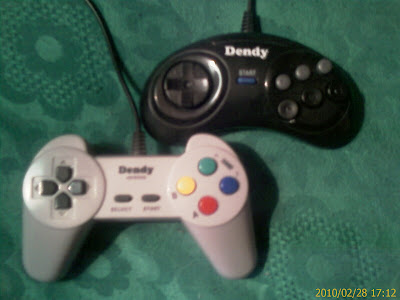 Sadly, I can't use my good ol' Beretta lightgun (which fits the hand better than that 'The Punisher' revolver) because the input port of this console was thinner than one on Haili LM-888! Dammit. 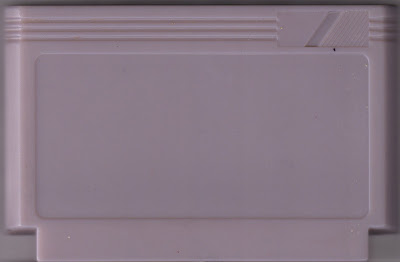 (Man, you cannot be serious about this pic.)

Before buying the Famiclone described above... I bought this. No cover. At all. Bought this at one of the shops of 'Atlant' network... and I actually saw it nearby an actual Dendy console, by Steepler, Dendy Junior! Yay! Still, when I came next week there, it was sold. Ah, never mind kids.

The cost of this is $1,43, counting that all games in this multicart minus one are kickass. Street Fighter VI - I own like three of these, no comment. Teenage Mutant Ninja Turtles: Tournament Fighters - ripped copyrights and no intro. (I had a TMNT:TF full in a pirated cart.) No glitches, at least... Golden Axe 4 - Lord of King, also known as Astyanax, recently dumped by CaH4e3. (Had this too, glitched vertical levels.) And Super Contra 6, gfx+code hack of Contra Force. 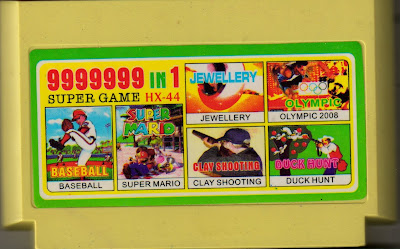 ...and the bundle cart. Despite what it says on the cover, the menu actually says that there are 19 games. 19 menu entries, at least. So, it has Hwang Shinwei's Magic Jewelry, Track & Field (listed as Olympics 2008), Circus Charlie, Duck Hunt, Baseball and, what's unusual to wait for in there, is the EUROPEAN version of Super Mario Bros. Honestly. The music speed is soooo fast and the music itself is soooo distorted... Basically, famiclones work on 50 frames per second but retain the same sound pitch as on NTSC systems, so what. 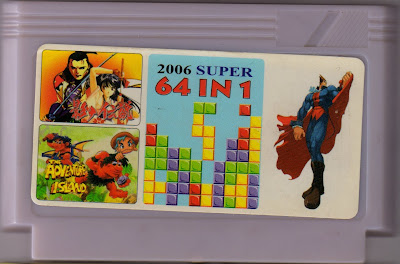 You may probably ask: 'WTF is Demitri doing here?' Reply: 'Ehrm, nothing'
Yup, you won't see any Darkstalkers or Castlevanias here, but you sure may play Tetris, Adventure Island or... The Legend of Kage (which is just annoying to deal with). Not a big loss, however, since all the roster is exactly the same as on one multicart, known as 64-in-1 (Mapper 255) [p1] in GoodNES. One fun glitch to observe, however: if you run Galaxian and then do a soft reset, all the menu colors will switch to orange and light-blue. Just like in times of the Orange Revolution in Ukraine, dammit... 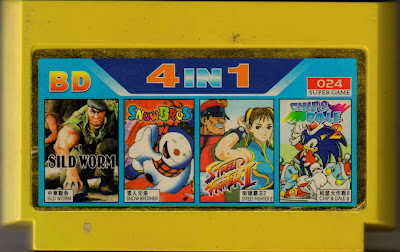 Here's one cart I got from a friend, thanks to Eugene Stezenko for this one... You'll meet his stuff there too. Yup, it retains the same 'BD' sign and even the same menu layout! The titles of the games are self-explanatory. It even has ONE MORE STREET FIGHTER VI WHICH I DON'T NEED. Talking about cartridge's art, it merely blows. Well, at least Commando's art used in Silkworm, some kind of postcard snowman for Snow Bros and Street Fighter Alpha art for Street Fighter VI is explainable. But what the hell are Sonic and chaos doing on Chip & Dale 2 cover?! 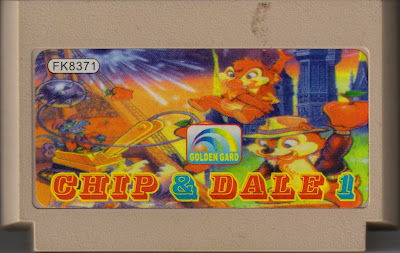 As far as I know, there are two series released under 'FK****' code: Golden Gard [sic!] and Trump Series [if you don't LAWL at this title, then your name is definitely Donald]. Not known if both of them were released by the same company, however (the proof can be found below)... but still. This is the reproduction of Japanese version of Chip & Dale Rescue Rangers. I had this when I was a kid, beaten it till the end, still remember those mechanical dogs, still remember the Fatcat thing... and beaten it once more. 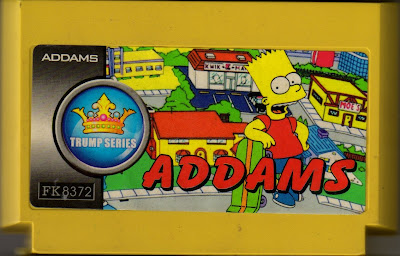 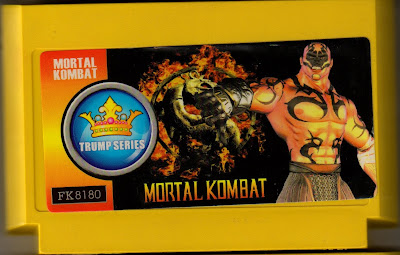 This piece of shit costed exactly the same amount of money as the first cartridge listed here was... but this time, that was NOT a 'special offer' anymore. It was Mortal Kombat 4. Lame rip of Ture MK3/Ultimate Mortal Kombat 3. Three stages, four unique fighters, squeaky music, 3 hours to beat. (More.) Trash it or redo the board to make a flash cart. Basically, I have beaten cheaply with Shao Kahn (well, whadday gonna do if the game is cheap itself?) (Cornerkick, my friend.) and yup, it still is covered with dust. 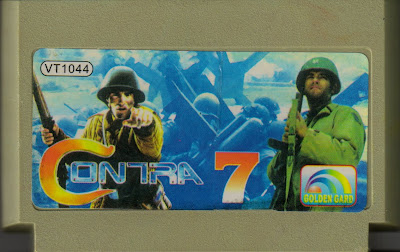 And here comes that proof. Golden Gard, but instead of 'FK', it has 'VT'. Why? Hell knows! Okay, so now we have... Waixing's terrible try to make their own Contra game. Thankfully, comes packed with a trainer so you don't have to rape yourselves trying to beat the CIRCUS CHAIR OF DOOM boss. (I rather hate that fucking predatorhead... and L rules in this game) 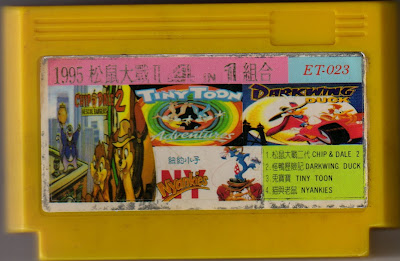 Perhaps the oldest cartridge I own. Dated 1995, no menu (hence that, reset-based). The only two games I've actually beaten there are NYankies (Rockin' Kats in the American release) and Chip & Dale 2. One remark about NYankies, however. Beaten the main mode in just one sit while was messing up with the levels that appear after an ending. Damn passwords... JAPANESE VERSION! JAPANESE CHARACTERS! Cracked head. 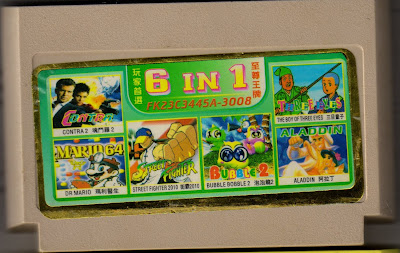 One of the best menus for a pirate multicart. Honestly. Now, to the details. Dr. Mario, unlike on the most multicarts, is full and doesn't have the endings ripped. Even the Nintendo's copyright is still here! Aladdin is... Magic Carpet 1001. Just hacked into Aladdin III. (Memories. :')) 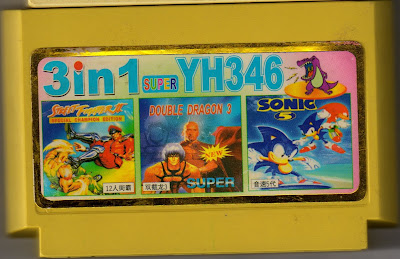 Cheap! Cheap!! Cheap!!! Only here and only today, we present you a special offer! Three shitty and annoying games in just one cartridge!.. Yup, I think that DOUBLE DRAGON THREE IS ANNOYING, even if it's the best of all the ports. Street Fighter VI - self-explanatory. Sonic 5 - Sonic the Hedgehog a.k.a. Somari. No difference, just has a terrible big red '5' written on the title screen (this version is dumped, as I recall). (It is.)

Oh. In fact, I've got a plenty of a multicarts (and just single-game boars) labeled with 'YH' letters. Here are two more for today. 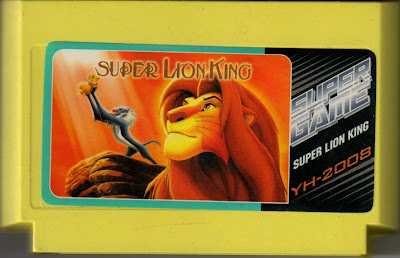 Pretty fresh reproduction, I must say. Dated 2008. Mapper four version that lacks bonus stage and shows the Super Game logo for a shorter time (I even doubt that it actually was Super Game/Gamtec (if possible) who released this). Still, was fun to recall some childhood memories. By that time, I had a Super Game (this time, TRUE Super Game multicart) that had Super Lion King, Chip & Dale and Tom & Jerry... WHERE IS IT? I COULD BRING IT FOR DUMP!! 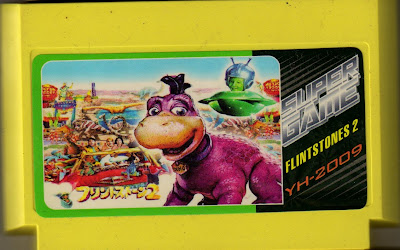 Same thing, just with one year thrown over the date of creation. Despite the title on the cover, this is actually 'The Rescue of Dino & Hoppy' which is part one, NOT two. Also, it turns out to be true that the 'Surprise at Dinosaur Peak!' became a prequel on such carts. What a rockhoward. 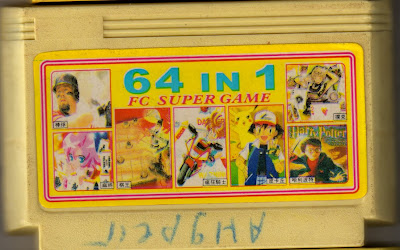 Here comes the dessert, folks! Grabbed from another friend, this time my sister's (whose name is Andrew, you may read it if you turn the image upside down), (Cyrill characters, folks.) this thing seems to be made by... possibly by Micro Genius, judging the layout and the music of the menu. Notable for containing FOUR (six-eight, if Chinese Chese [sic!] and Mahjongs count) pirate games. Harry Legend with warps (you'll never see a level select menu there), Harry Potter 1001 (earrape! period), Pika Man (same) and Sachen's World of Card Game (with ripped copyrights. That thing was actually fun to mess up with since I got bored of platform games). The rest is filled with first-generation games and warps to some of them.

Okay, that's it for now. Part two coming up soon and me coming up into the bathroom to have a quick wash. Comments, feedback and else is appreciated.
The tale thends there. Ad break.
Written by: V Date: 8:26:00 PM 5 comments: