I dunno if Game Genie was really sold at Steepler's, but considering that Video-Uss Dendy was the first videogame magazine in Russia and that Video-Uss publishment had contacts with such widely known magazines as Joystick and Joypad (see below)... I guess that everyone who read this article wished to have such a thing at home.

Short but enjoyable. So enjoy it and sho-- wait, that's from the other movie.

IS IT POSSIBLE TO "HACK" A GAME ON THE CARTRIDGE?

A gaming console is not a computer in a regular meaning of this word., it doesn't allow you to reach every file of it, it doesn't allow you to change the code of the game. So, on the question placed in the header, some will say that it's not possible, some will say that it's only for the experts who own special hardware - EEPROM programmers (and that won't be in all cases), but there are the people who will definitely say 'yes'. These are the gamers who know what Game Genie ("Genius of the Game" [sic! - Nicker]) is. With Game Genie, you may be able to play your favourite games even better and use all the features of them, usually, even hidden ones! It's inserted into the console exactly the same way as a regular cartridge, and the game cartridge itself has to be inserted into Game Genie.

THE CONSOLE FOR THE CONSOLE! [ehrm, 'An addon for the console' would be a more exact translation, but it lacks the loudness of the original phrase - Nicker]

Game Genie, without damaging the cartridge, modifies the game for the rules you write itself. Lives that never end, ammo, invulnerability, superspeed, new arsenal, unlimited time - now you control these all. The Game Genie manual lists the descriptions of the genial possibilities of 74 games. These include Batman, Castlevania, Duck Tales, Double Dragon, Dr. Mario, Robocop, Solomon's Key, Tetris, Top Gun and many other popular games. Find the game that interests you in a manual and, using the arrows, input the listed codes on the Game Genie screen. Every code corresponds to the new special abilities the characters will gain. After that, press START button and the old game with new things shall begin. You may even combine infinite lives and energy or warp to the last area with superjump and infinite ammo e.t.c. Easy. The interface of Game Genie is understandable even for kids. If you want to play the game without using Game Genie's features, there's not need in pulling it off from the console, All you need is pressing START button without entering the code, then Game Genie will forget all your previous entries and you'll enter the game like if the cartrigde would be inserted directly into the console. 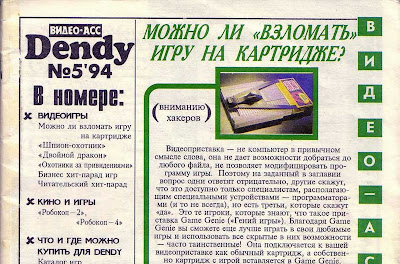 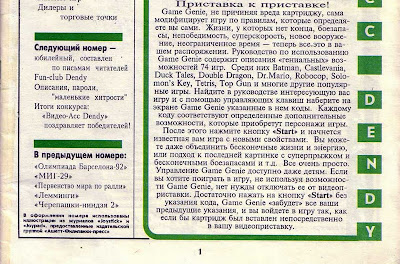